Above and Beyond With Flying Colors

The following post is a reprint of an article written for the USAF 60th Anniversary publication: USAF FOUNDING CENTENNIAL & 60TH ANNIVERSARY 1907 - 1947 - 2007

ABOVE AND BEYOND
WITH FLYING COLORS:WOMEN AIRFORCE SERVICE PILOTS 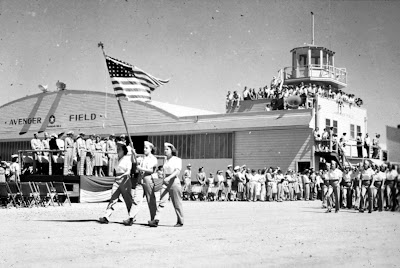 "If a fighting war should (ever again) eventuate, I would… willingly lay aside my manifold civilian obligations…and if necessary, in the lowest rank, crawl across the country on my hands and knees to be of aid to my country."
Jacqueline Cochran, 1954
Over a decade before Jacqueline Cochran spoke those words, she fought against stereotypes, red tape, apathy and public opinion to prove that, if women pilots were given the same training as male aviation cadets, they would be equally capable of flying military aircraft for their country. As the exemplary flying records of 1,102 WWII Women Airforce Service Pilots prove, she was right.

During the 1930’s, Jacqueline Cochran became one of the world's foremost women pilots and visionaries. In September of 1939, realizing the importance of air power, Ms. Cochran wrote First Lady Eleanor Roosevelt about her vision of training women pilots so they could release male pilots for combat, should the need arise. That same month, Hitler invaded .

As 's allies struggled against the German Blitzkrieg, women pilots joined the fight. In , "Night Witches" flew combat missions, and in , led by Pauline Gower, women from , , , , , and ferried aircraft for the RAF as part of the ATA (British Air Transport Auxiliary). In , Ms. Cochran persisted in her quest for a military flying training program for American women, meeting with General Hap Arnold, Commanding General of the Army Air Force in 1941.

had not yet entered the war. General Arnold suggested that she fly a lend-lease bomber to to publicize the need for pilots overseas. While in she had an opportunity to study the ATA and formulate her own plan. Ms. Cochran's plan included military flight training, organization and regulations for women pilots to serve as part of the Army Air Forces. She was confident that, with training, women pilots could serve in every stateside flying capacity in every command in the Army Air Force. As she later wrote, "I insisted that if women were to be used … it should be on an organized basis. Otherwise, I was afraid the female effort would be a flash in the pan."

Returning from , she met again with General Arnold. He was still not convinced: "Frankly, I didn't know in 1941 whether a slip of a girl could fight the controls of a B-17 in heavy weather." So, with the General's blessing, Ms. Cochran recruited 25 outstanding American women pilots for the ATA and took them to . General Arnold did promise that, when the time was right, he would send for her to put her plan into effect. After Pearl Harbor and heavy losses in North Africa, General Arnold, in desperate need of pilots, asked her to return to to implement her training program.

On September 15, 1942, the Women's Flying Training Detachment (WFTD), headed by Director Jacqueline Cochran, was officially approved, and two months later, the first group of women pilot trainees paid their own way to to enter Army Air Force flight training. As they raised their right hands and took the Oath "To serve, protect and defend …so help me God," they were assured that they would eventually be militarized. However, because there was a severe shortage of combat pilots, General Arnold wanted to 'get them in the air' and worry about Congressional militarization later.

Due to lack of facilities in , the program was soon moved to Avenger 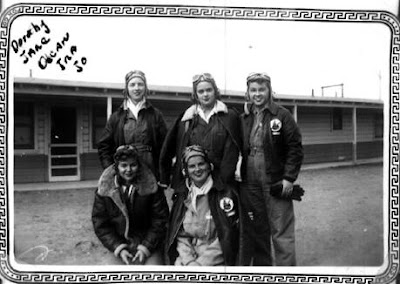 Field, , where the women pilots received the same training as the male cadets, with the exception of more cross country flying and less aerobatics. During the nearly seven months of flight training, with AAF officers and personnel in command, trainees lived by military rules and, after graduating, reported to military commanders at Army air fields and bases across America.
In September, 1942 Nancy Harkness Love, an outstanding woman pilot, recruited 27 licensed women pilots to fly as civilian ferry pilots (Women’s Auxiliary Ferrying Service) for the Air Transport Command. In 1943, General Arnold ordered the WFTD and WAFS to merge and named them Women Airforce Service Pilots (WASP). Jacqueline Cochran was named Director of Women Pilots and Nancy Love continued to head the ferrying operations.

Before the WASP program was terminated, 25,000 women had applied, 1,830 were accepted, but only 1,074 graduated. From the first day of training to the day the WASP hung up their Army parachutes for the last time, everything the women pilots did was scrutinized, measured and recorded. Their health, weight, strength, skill, stamina, patience and perseverance were tested. Every time a WASP stepped into a new kind of aircraft, it was a groundbreaking experiment on behalf of all women pilots. As every WASP knew, if one WASP failed, the whole program would be at risk.

They did not fail. In fact, they EXCEEDED beyond all expectations. In two years, at 120 air bases across , WASP flew over 60 million miles, in every type aircraft and on every type mission any male AAF pilot flew, except combat. WASP attended and . They flew strafing, night tracking and smoke laying missions. They towed targets for air-to-air and ground-to-air gunnery practice, with gunnery recruits firing live ammunition. They ferried planes and transported cargo, personnel and parts of the atomic bomb. They instructed, flew weather missions and test flew repaired aircraft. WASP even flew aircraft that male pilots refused to fly, including the B-26 "Widow Maker" and the B-29 "Super Fortress," to prove to the male pilots they were safe to fly. They flew with an unwavering urgency and a passion for their mission: to free male pilots for combat. WASP not only passed every test, they outscored their male counterparts.

Thirty-eight WASP were killed flying for their country. Because they were officially civilians, their bodies were sent home in cheap pine boxes, their burial at the expense of their family or classmates. These heroic pilots were denied any military benefits or honors – no gold star allowed in their parents' window, no American flag for their coffins. Three weeks before a 44-W-4 trainee was to graduate, her mother received an official telegram from the country her daughter so proudly served. It simply said: "Your daughter was killed this morning. Where do you want us to ship the body?"

When victory seemed certain, the WASP were quietly and unceremoniously disbanded, without any benefits, honors and few thanks. On 7 December 1944, in a speech to the last graduating class, General Arnold said,

"If ever there was any doubt in anyone's mind that women can become skillful pilots, the WASP have dispelled that doubt…You and more than 900 of your sisters have shown you can fly wingtip to wingtip with your brothers. …I salute you and all the WASP. We of the Army Air Force are proud of you. We will never forget our debt to you."

Thirteen days later, the WASP were disbanded. They hung up their parachutes and paid their way back home. Their military records were classified “confidential” and filed away in government archives, where they remained, unopened, for the next 33 years, unavailable to historians who wrote the official accounts of WWII. The AAF did forget -- and so did .

In November, 1977, under the leadership of General Arnold's son, Col. Bruce Arnold, USAF Ret., surviving WASP, and Senator Barry Goldwater, Congress narrowly voted to give WASP the Veteran status they had earned. WASP were not even invited to the bill signing. Their medals came in the mail.

2007 marks the 65th Anniversary of the WASP, the first women in history to fly ’s military aircraft. Today, there are fewer than 400 surviving WASP. However, their legacy lives on in the skies over Afghanistan and Iraq, as American women pilots serve their country, flying wingtip to wingtip with their brothers, and it reaches out to inspire those who fly into the darkness of space: "The WASP were and still are my role models." (Astronaut Eileen Collins)

On December 7, 1944 General Barton K. Yount, Commanding General, Army Air Forces Training Command said:
“We shall not forget the accomplishments of our women fliers and their contributions to the fulfillment of our mission. They have demonstrated a courage which is sustained, not by the fevers of combat, but the steady heartbeat of faith—a faith in the rightness of our cause, and a faith in the importance of their work to the men who do go into combat."
Jacqueline Cochran knew, without a doubt, that if women were given a chance, they would fly wingtip to wingtip with their brothers. Because of her vision and determination, the pioneering women of the WASP were given an unprecedented opportunity. They did not disappoint. They served their country with honor, with courage, with integrity, with faith and with patriotism. The WASP passed every test, flying

ABOVE AND BEYOND WITH FLYING COLORS,
RED, WHITE AND * BLUE!

* blue is the color of the WASP uniform, designed for the WASP by Bergdorf Goodman () and approved by Gen. Hap Arnold and Gen. George C. Marshall. Today, it is called Air Force blue!

I think wow gold and world of warcraft gold